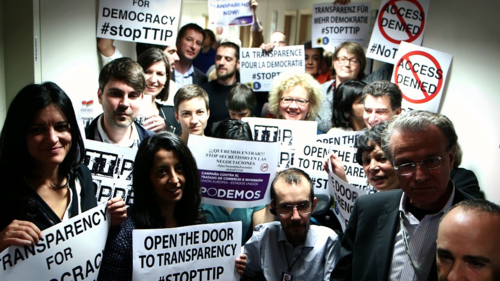 500 years ago Machiavelli said the best dictatorship operates under the appearance of democracy. These secret negotiations make him look like a seer

Michael Froman has no intention of any kind of transparency, which would make it harder for him to lie.

Watch out when your life and future are kept secret from you! That means that when one's life is in the hands of other people especially when that person is kept in the dark, it mostly will mean suffering and misery.

Nestle is sucking the water out of the ground in drought stricken California. It seems to me the corporations want a class of people to have nothing to live on except for the saliva in their mouths.

Water keepers' alliance and Earth Justice both talked about environmental racism. Fracking and mountain top removal are in poor white areas. How hypocritical it is to crack down on alcohol, drugs and tobacco while at the same time destroying the environment!

Americans are overwhelmingly against this secret trade deal. NO TO THE TPP!

If our government doesn't trust us enough to tell us what is happening in our own country, what hope is there for a beneficial, or in the very least mutual, relationship between the U.S. citizens and the TTIP or TTP?