Rock Against the TPP

The corporate forces behind the Trans-Pacific Partnership (TPP) kept the deal as secret as possible for as long as possible. And they would love for that silence to continue as Big Business lobbyists push Congress to vote on this terrible “trade” deal. 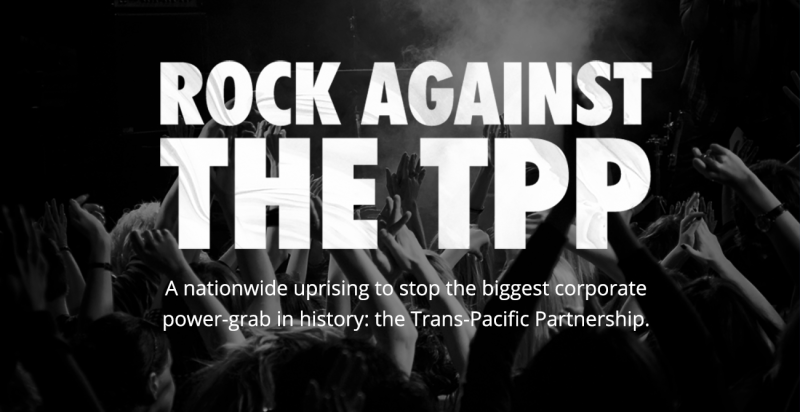 The Rock Against the TPP roadshow — which has already generated buzz in Rolling Stone and Billboard — is a nationwide concert series going on throughout the summer.

Audiences at the free shows will be treated to performances by Tom Morello, activist and guitarist of Rage Against the Machine, Audioslave and Prophets of Rage; Evangeline Lilly, advocate and actress best known for Lost and The Hobbit; the infamous political punk rock group, Anti-Flag, and many more.

In addition to musicians and celebs, expert speakers from major organizations will explain how the TPP would threaten U.S. jobs, food safety, access to medicines and other aspects of our daily lives.

The first show is July 23 in Denver, Colorado. Other locations after that will be announced — check www.RockAgainstTheTPP.org regularly to see if a city near you is added to the list.

Fight for the Future is hosting the concert series, along with help from a diverse coalition of groups including Public Citizen, Sierra Club, the Communications Workers of America, the Citizens Trade Campaign and others.

See the full line-up and tour dates at www.RockAgainstTheTPP.org!

Slaughter: The Flawed TPP Agreement Would Shift the Balance of Power Toward Foreign Corporations

This is a guest post by Representative Louise Slaughter (NY-25)

The American people are increasingly realizing the perils of the pending Trans-Pacific Partnership (TPP) agreement between the U.S. and eleven other countries. After decades of NAFTA-style deals costing millions of jobs and devastating entire industries, workers across America are speaking out against this dramatic expansion of failed trade policy. But because of a little-known provision tucked into this deal, the TPP would actually stack the deck even further against our workers and innovative companies across the country.

As the representative for Rochester, New York, I have never seen a trade agreement that benefited the American manufacturer or American worker. There are hundreds of reasons why the TPP would be a particularly bad deal for our country. It would force our workers into unfair competition with countries like Vietnam, where the minimum wage is less than 65 cents an hour, and it has no effective provisions to address foreign currency manipulation – the single-most pressing trade issue facing U.S. manufacturers. For American families, the TPP would open the door to a flood of unsafe food imports and threaten to raise prices for vital drugs.  It would encourage environmentally destructive practices and do nothing to address climate change. This deal would also represent a dramatic step in the wrong direction by tying the U.S. to countries that do not value the rights of women.

But worse still is that the TPP would pave the way for an unprecedented attack on our nation’s sovereign right to protect the health and welfare of our people, all in the name of corporate profits. This process, called investor-state dispute settlement (ISDS), would allow multinational corporations to challenge U.S. laws they don’t like outside of the standard judicial system. This could leave laws on everything from requiring stringent drinking water standards to raising a state’s minimum wage in the hands of three unelected and unaccountable arbitrators. It’s blatantly undemocratic, and would represent a major victory for foreign corporations.

There are only a handful of these arbitrators in the world, and some are even allowed to go back and forth between serving as a judge and doing the bidding of corporations by bringing cases against governments. This dynamic is ripe for conflicts of interest and would be seen as unethical in almost any legal system.

Since our previous trade agreements have largely been with less developed countries that have little investment in the U.S., these types of cases used to be rare. But in recent years, more and more corporations have learned to exploit the system and ISDS cases have become more common. In the first 30 years since this ISDS became a reality, just 50 of these types of cases were launched. But from 2011 to 2013, corporations brought 50 cases every year. These cases brought by foreign corporations have attacked our policies governing everything from climate to energy to labor safeguards.

This growth could skyrocket even further if the TPP becomes a reality and adds the likes of Japan and Australia as sources of potential challenges. Although supporters of this misguided trade deal like to point out that the U.S., unlike many other countries, has never lost a ISDS case, it would be foolish to bet the farm on this record as the incentives for corporate profit continue to grow.

If we were to lose a case, the damages would be astronomical, since there is no limit on the amount of taxpayer dollars that a foreign corporation could ask for from our government. This process allows a winning company to ask for its expected lost profits calculated in perpetuity. The U.S. doesn’t have to lose a case to be impacted by this process – even if the United States ultimately prevailed in a case, we could be forced to spend millions in the process. In fact, millions in taxpayer funding have already been spent defending our laws against ISDS challenges.

America has the best workers and most innovative companies in the world, and we can compete and win in the global economy if given a fair and level playing field. Unfortunately, the TPP and the ISDS system in particular would shift the balance of power toward foreign corporations and exacerbate the weaknesses of past trade deals. It’s just the latest reason why we should walk away from this flawed trade agreement and finally implement policies that truly protect American jobs and American workers.