Home Archives Subscribe Back to TradeWatch.org
Rock Against the TPP
Public Health Takes a Hit Even as Uruguay Prevails in Infamous Philip Morris Investor-State Attack

On June 29, the U.S. International Trade Commission (ITC) released a study on the economic impacts of trade agreements on the United States economy. This study was among those required by the 2015 Fast Track legislation. The report:

The ITC has traditionally overstated the benefits that FTAs have had on the U.S. economy by incorporating deceptive and downright false assumptions in its models. The aggregate U.S. trade deficit with FTA partners has increased by $141 billion, or 418 percent, since the FTAs were implemented. In contrast, the aggregate trade deficit with all non-FTA countries has decreased by about $46 billion, or 6 percent, since 2005 (the year before the median entry date of existing FTAs). Using the Obama administration’s trade-to-jobs ratio, counting both exports and imports, the FTA trade deficit surge implies the loss of over 745,000 U.S. jobs. 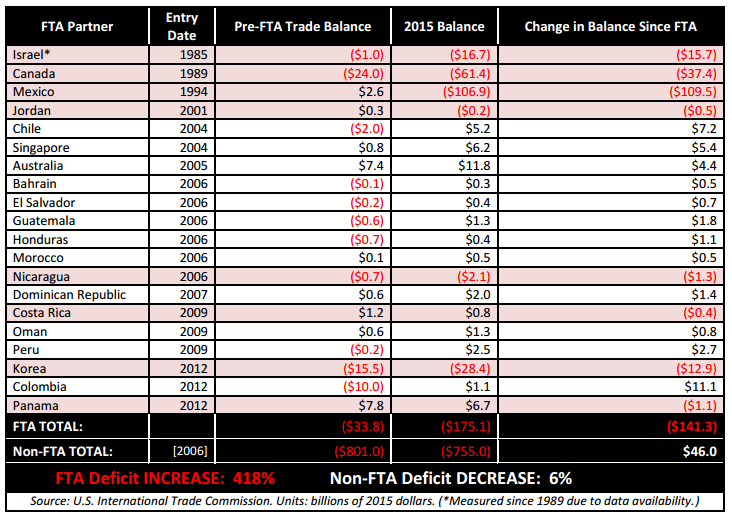 While the ITC report implies that more recent FTAs include higher standards on labor and environmental provisions and thus may yield trade balance improvements (Page 94), there is no correlation between an FTA’s inclusion of the higher standards of the May 10, 2007 deal and its trade balance. The Korea FTA included the “May 10” standards, and yet the U.S. trade deficit with Korea has grown over 80 percent in the four years since the deal’s passage. Meanwhile, most post-NAFTA FTAs that have resulted in (small) trade balance improvements did not contain the “May 10” standards. Reducing the massive U.S. trade deficit will require a more fundamental rethink of the core status quo trade pact model extending from NAFTA through the Korea FTA, not more of the same.