Proponents of the Trans-Pacific Partnership – or TPP – have spent decades promising U.S. farmers and ranchers that free trade agreements are good for agriculture. Time and again, these promises have been broken. Since becoming the researcher at Public Citizen’s Global Trade Watch, I have been digging through the agriculture trade data. The case is quote compelling:  our past trade agreements have had a negative impact on U.S. agriculture. That is worth considering, because the TPP would double down on the past model. 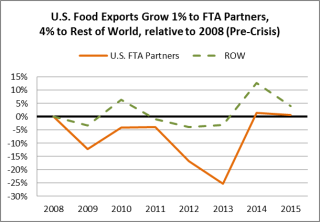 Now let’s consider what to make of the recycled promises that the TPP will be a boon for U.S. farmers. The TPP itself was modeled on the U.S.-Korea free trade agreement that entered into force in April 2012. Before its passage, U.S. Agriculture Secretary Tom Vilsack declared: “we believe a ratified U.S. Free Trade Agreement [with Korea] will expand agricultural exports by what we believe to be $1.8 billion.”

In reality, exports to Korea of all U.S. agricultural products fell $1.4 billion, or 19 percent, from the year before the FTA took effect to its recently-completed fourth year of implementation. During that same period, total U.S. agricultural exports to the world only declined by 9 percent.

And there are many products that have experienced declining exports since the U.S. – Korea FTA.

Those hardest hit by rising agricultural imports and declining trade balances are the smaller-scale U.S. family farms. Since 1993, the year before NAFTA took effect, one out of every ten small U.S. farms has disappeared. By 2015, nearly 198,000 small U.S. farms had been lost.

In addition to this report, the Department of Agriculture’s conducted its own study and found that the TPP would increase U.S. growth by 0.00 percent if all tariffs on all products were eliminated, which did not occur. The U.S. International Trade Commission’s study found that nearly half of all U.S. agricultural sectors would experience worsening trade deficits under the TPP. And this study was conducted under many false assumptions, including the assumption that countries won’t manipulate their currency to gain a competitive edge in exports.

Government data undermine the claim that farmers and ranchers benefit under free trade agreements. To read more of our findings on what trade agreements have meant for U.S. agriculture, please click here.

Guys!
I found something incredible !!
such an amazing story, can you believe things like that can happen?
https://quivo.co/31482-una-mujer-fue-abusada-al-menos-por-10-hombres-en-rio-de-janeiro.html