Will the Trump Administration Fix the Distortions in U.S. Trade Data?

Recent press reports reveal that the Trump administration is exploring changes in how U.S. trade data is reported. Depending on what those changes are, that could be good news, because the current method for reporting bilateral trade flows significantly distorts trade balances to dramatically and deceptively reduce U.S. trade deficits. No doubt that defenders of status quo U.S. trade policies will gin up an attack on any efforts to fix these distortions.

So it is ironic, but not surprising, that the coverage insinuates that the Trump administration is trying to bias the data for political purposes: For years, members of Congress and trade analysts have demanded changes to U.S. trade flow reporting to make it more accurate. Why? Because proponents of past trade agreements have politically exploited the way that the current trade data inaccurately inflates export levels and artificially suppresses trade deficit figures to try to hide past pacts’ damage.

Namely, the trade data that is reported monthly by the Census Bureau counts “foreign exports,” also known as “re-exports” as if they were U.S.-made goods. This can dramatically and inaccurately inflate export figures and hide trade deficits. According to the official Census Bureau definition, re-exports are goods made abroad, imported into the United States, and then re-exported again without undergoing any alteration in the United States. Re-exports support zero U.S. production jobs.[i]

To put this into perspective, if one counts as U.S. exports only goods actually produced here, the 2015 U.S. goods trade deficit with Mexico was $109 billion and with Canada $63 billion – a $172 billion North American Free Trade Agreement (NAFTA) goods deficit. However, if one includes the foreign-made re-exported goods as U.S. exports, the NAFTA goods deficit shrinks by more than half - to $76 billion. The Mexico goods deficit falls to $60 billion and the Canadian deficit to $16 billion. 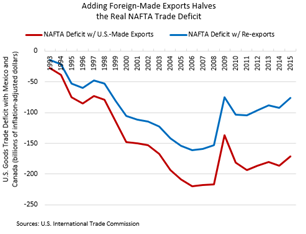 If the Trump administration were to institute a new method to report trade data that accurately captures the balance between American-made exports to each country and imports from each country that are consumed in the United States, it would be a significant improvement on the currently available information. And as described below, the way to do this is not difficult as a policy matter. It would merely require tracking U.S. exports on the basis of the country in which they are actually produced.

Currently, each month, the U.S. Census Bureau releases raw data on the “total exports” from the United States and total imports coming in (called “general imports”). This data, as demonstrated by the NAFTA example, distorts bilateral trade balances. For example, this data counts as U.S. exports goods produced in China, stored in a warehouse after being taken off a ship from China in California’s Long Beach port and then later, without alteration, trucked to a destination in northern Mexico. This data also counts the Chinese imports into the United States as part of the U.S.-China trade balance. The result: The U.S. deficit with Mexico would be artificially reduced, and the U.S. deficit with China would be artificially increased. (The Census measure does provide accurate accounting of our trade balance with the world because the re-exports and those imports that get re-exported balance out.)

A more accurate measure for bilateral trade balances come from the U.S. International Trade Commission (ITC). Each month, a few days after the Census data is released, the ITC posts refined data for “domestic exports” that includes only U.S.-produced exports and data for “imports for consumption” that removes imports destined for export processing zones. This ITC data is used in the congressionally mandated trade agreement studies required under Fast Track that are the basis for projections on trade pacts’ effects on economic growth and jobs. This data accurately captures American-made exports. But the import data still can be skewed because some of the imports counted in “imports for consumption” may be re-exported. That is to say that the U.S. International Trade Commission’s current import data is not detailed enough to avoid distorting the U.S. bilateral trade balances with numerous nations on the import side even as it corrects for the false inflation of exports.

If the U.S. government provided data on where all goods exported from the United States were actually produced, then it would be possible to extract from the import data those goods that end up being re-exported. Canada requires that all imports indicate a country of production. So, for instance, if a Korean firm producing televisions in Mexico so as to obtain duty-free access into the U.S. consumer market under NAFTA were to import $2 billion in televisions into the United States, but then $500 million of those goods were re-exported to Canada, the Canadian data would let us know to count only $1.5 billion as U.S. imports for consumption. Expanding on this notion, if the Trump administration were to require that all U.S. exports indicate their country of production, then the import side of the ITC data could be perfected across the board.

As a policy matter, this is a rather painless solution to a trade data problem that currently thwarts  the availability of the accurate data needed to inform U.S. trade policymaking decisions. But proponents of status quo trade policies can be expected to launch a nasty political attack on such an improvement because it would clarify the enormity of the gap between what was promised for pacts such as NAFTA relative to their actual outcomes. Ironically, such an improvement also likely would bring down the U.S.-China trade deficit figures some.

For years, the U.S. Chamber of Commerce has pushed out various cuts of the raw Census data to claim that past trade pacts have not generated significant trade deficits. In 2014, then-U.S. Trade Representative Michael Froman even used a cut of the raw data to claim, absurdly, that the United States no longer had a NAFTA trade deficit.

Interests seeking to maintain current U.S. trade agreements and policies undoubtedly oppose refinements to the current data that would accurately expose the extent of U.S. trade deficits with trade agreement partners. This is especially true with respect to NAFTA countries, because the portion of re-exported versus domestically produced goods relative to total U.S. exports to the NAFTA nations has increased over time. 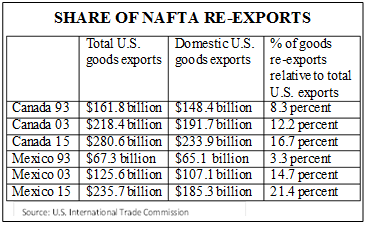 These interests have pushed for their own changes to U.S. trade data, including a 2014 proposal for “Factoryless Goods” accounting. This proposal would have counted as a U.S. export an iPhone produced in China that is exported from China to Germany. These interests also raise a series of specious arguments against removing foreign-made exports from U.S. export figures. For instance, they claim that re-exports have some U.S. value-added, just not enough to shift a product into a new tariff category, even though the Census definition of re-export states explicitly that re-exports have zero value added in the United States: Foreign Exports (Re-exports: For statistical purposes: These are exports of foreign-origin goods that have previously entered the United States, Puerto Rico, or the U.S. Virgin Islands for consumption, entry into a CBP bonded warehouse, or a U.S. FTZ, and at the time of exportation, have undergone no change in form or condition or enhancement in value by further manufacturing in the United States, Puerto Rico, the U.S. Virgin Islands, or U.S. FTZs. For the purpose of goods subject to export controls (e.g., U.S. Munitions List (USML) articles) these are shipments of U.S.-origin products from one foreign destination to another.)

When confronted with the accurate data, NAFTA defenders then typically shift to claims that the NAFTA deficit mainly represents trade in oil and other fossil fuels. But the share of the U.S. NAFTA goods trade deficit that is composed of fossil fuels (oil, gas and coal) has declined under NAFTA, from 82 percent in 1993 to 26 percent in 2015, as we have faced a surge of imported manufactured and agricultural goods from NAFTA countries. Even if one were to remove all fossil fuel categories from the balance, the remaining 2015 NAFTA goods trade deficit was $127.3 billion. 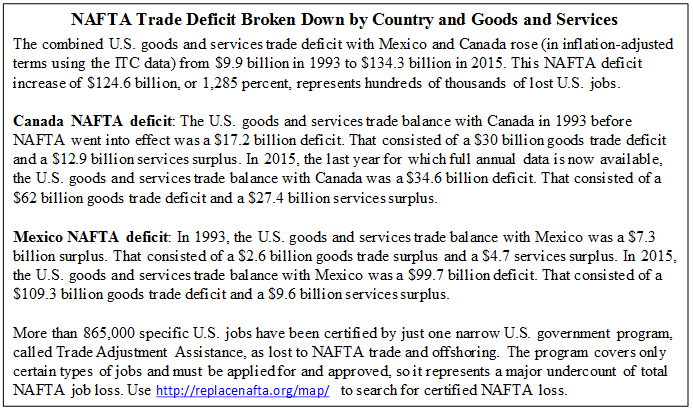 Trump Missed Deadline for Promised Start of NAFTA Renegotiation in 100 Days, But Whenever Talks Begin, It is the Content, Not The Speed, That Counts

The Trump administration can rename NAFTA the North American Free and Most Fairest of Them All Trade Agreement, but given that NAFTA is packed with incentives to offshore jobs and special protectionist goodies for various industries, NAFTA must be replaced – not tweaked – to actually deliver better outcomes for working people.

Monthly government data will show whether a NAFTA replacement delivers on the trade deficit reduction and job creation Trump has promised and to move those numbers will require a new deal that raises Mexican wage levels and environmental standards and eliminates NAFTA’s job and investment offshoring incentives and ban on Buy American procurement.

Replacing NAFTA is important, but with China counting for half of the U.S. trade deficit, it is odd that Trump has not announced an end to negotiations almost completed by the Obama administration for a U.S.-China bilateral agreement that includes the job offshoring incentives at the heart of NAFTA or  declared China a currency manipulator on his first day as promised.

It’s ironic that Trump is the beneficiary of the “Fast Track” trade authority narrowly enacted by congressional supporters of NAFTA. By delegating away its constitution trade authority, Congress has empowered Trump to unilaterally launch NAFTA renegotiations or create new bilateral deals with Mexico and Canada; determine the contents, sign and enter into deals before Congress gets a vote; and then write implementing legislation and force congressional consideration in 90 days with amendments forbidden and Senate supermajority rules suspended.

Under the Fast Track rules, Trump needed to have given notice on Monday, Jan. 31, to be able to start NAFTA renegotiations within his first 100 days as promised.

If the 500 official U.S. trade advisers representing corporate interests who have had a privileged role in developing our past trade deals, including NAFTA, remain in place to shape NAFTA renegotiations, the resulting deal not only could be more damaging to working people, but – like the Trans-Pacific Partnership (TPP) – become impossible to enact.

Even with Fast Track, Trump requires House and Senate majorities to enact a NAFTA redo. Most congressional GOP and their corporate allies support the offshoring incentives and other terms that must be eliminated if Trump is to deliver on his deficit reduction and job growth goals. Building a congressional majority requires that a NAFTA replacement exclude terms that would alienate congressional Democrats who for decades have promoted NAFTA alternatives to expand trade without undermining American jobs and wages, access to affordable medicine, food safety or environmental protections. (See Citizens Trade Campaign’s Jan. 13 letter to Trump and U.S. Rep. Rosa DeLauro’s Jan. 3 letter to Trump on what must be in a NAFTA replacement for it to provide broad benefits.)

Many congressional Republicans and the corporations that have rigged past deals view NAFTA renegotiation as a means to revive aspects of the TPP. This includes limits on generic competition that bring down medicine prices for consumers. Including such terms would eliminate Democratic support.