Key findings of the study include:

“Our analysis proves that Donald Trump is not fulfilling his signature campaign promises to stop offshoring and bring back American jobs.  Even though he’s signed over 60 executive orders during his first 100 days, he has yet to use the power of the pen to stop corporations that receive taxpayer dollars from shipping American jobs overseas,” said Joseph Geevarghese, director of Good Jobs Nation.

“After pledging to punish companies that offshore American jobs, Trump has not even used his expansive unilateral authority to ban offshorers from being awarded lucrative government contracts.  Instead of delivering on his promises to end offshoring and create American jobs, Trump is rewarding companies that offshore with big contracts paid by our tax dollars. He has not introduced the End Offshoring Act or launched the NAFTA renegotiations he promised for his first 100 days, and he caved on taking tough actions to reduce our huge job-killing China trade deficit,” said Lori Wallach, director of Public Citizen’s Global Trade Watch.

“It's disgusting that companies like T-Mobile get taxpayer money at the same time they’re sending thousands of jobs abroad,” said Jamone Ross, a former call center worker for T-Mobile in Texas, who lost his job  in 2012 along with 500 co-workers when T-Mobile shifted their work to Asia and Honduras.  “When I lost my job I’d just gotten married and bought a house. Thanks to T-Mobile, I spent the first year of my marriage taking out loans to keep up my mortgage payments, and the next year digging myself out of debt.  Friends of mine lost their cars and their apartments. If Trump really cares about American workers, like he says, he should stop this, right now.”

U.S. presidents have broad executive authority to enact “policies and directives” for federal contracting. Trump has failed to exercise this authority to cut off firms that offshore from obtaining lucrative government contracts paid with taxpayers funds.

The report highlights that Trump appeared willing to flex his muscle as “purchaser-in-chief” right after the 2016 election with his high-profile interventions to try to prevent United Technologies, a major defense contractor, from shipping its Carrier subsidiary’s operations to Mexico.  However, the study finds that since then Trump not only has failed to take promised actions, such as introducing and “fight[ing] for passage within the first 100 days of my Administration” of a Stop Offshoring Act in his first 100 days, but his administration has approved lucrative contracts with some of the nation’s most notorious chronic offshoring corporations.

On March 31, the Office of the United States Trade Representative (USTR) released the National Trade Estimate report. This is a statutorily-required annual review of U.S. trade partners’ “significant trade barriers” that the U.S. government seeks to have eliminated.

The 492-page report provides excellent insight into the growing global backlash against our current “trade” policies. While President Donald Trump has flip-flopped on his pledges to reverse the gigantic job-killing trade deficit with China, this U.S. government report labels as illegal trade barriers an array of public interest policies, including – shamefully – other governments’ policies to promote breastfeeding.

According to the United Nations Children’s Fund (UNICEF), “breastfeeding is the foundation of good nutrition and protects children against disease.” But only 43 percent of infants (0-5 months) in the world are exclusively breastfed, and this number is even lower in parts of Latin America, Africa and Europe.

For decades, infant formula manufacturers have been accused of aggressive marketing campaigns in developing countries to discourage breastfeeding and instead, to push new mothers into purchasing formula.  The famous boycott of Nestlé in the 1970s led to the development and adoption by nations worldwide of the UNICEF/World Health Organization (WHO) International Code of Marketing of Breastmilk Substitutes (The Code) in 1981. The Code sets guidelines and restrictions on the marketing of breastmilk substitutes, and reaffirms governments’ sovereign rights to take the actions necessary to implement and monitor these guidelines.

To promote and protect the practice of breastfeeding, many countries have implemented policies that restrict corporate marketing strategies targeting mothers. These policies have led to increased breastfeeding in many countries even though greater progress is still needed.

Rather than embracing these efforts to safeguard the world’s most vulnerable inhabitants, the Trump administration, in its March 31 report, indicted the policies as “trade barriers” that should be eliminated:

Seriously? Why not also label popular public health policies aimed at reducing medicine prices as trade barriers too? Oh, actually, that is also a feature of the report. 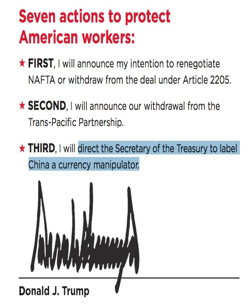 This reversal comes on the heels of last week’s study-not-action move on his promise to reduce the trade deficit. President Trump signed an Executive Order to create yet another study on foreign trade barriers –   oddly enough, on the same day that his administration released the government’s annual report that analyzes “significant foreign trade barriers” among U.S. trading partners.

So what are these so-called “trade barriers”?

Well, sadly, they are an embarrassing list of attacks on other countries’ public health and environmental policies, financial regulations and even religious standards.

Japan’s programs that reduce the cost of medicines and New Zealand’s popular health programs that control medicine prices are on the hit list. (Yup, the list includes attacks on policies that promote competition from generic drugs to bring down prices for consumers, which ostensibly is what “free trade” is supposed to do.)

Also targeted is Vietnam – for strengthening its inspection processes for imported foods.  Mexico’s new energy efficiency standards for electronic and electrical equipment are smacked because they impose “burdensome and costly requirements on products exported to Mexico.”

Bad on Canada for having requirement that drug companies, um, demonstrate a medicine’s utility before firms can obtain monopoly patent rights. Somehow the European Union’s requirement that corporations “obtain parental consent to process the personal data of minors aged 16 years or younger” is a trade barrier because this forces corporations “to interrupt or curtail service to a large and active segment of their customer base.”

And then they go after the babies. Public interest policies aimed at promoting breastfeeding are “significant trade barriers.” That includes a draft Hong Kong code meant to “protect breastfeeding and contribute to the provision of safe and adequate nutrition for infants and young children.” The administration labels this to be a technical barrier to trade due to its potential to reduce sales of “food products for infants and young children.”

The report goes after Thailand for introducing a new regulation that would impose penalties on corporations that violate domestic laws restricting the “promotional, and marketing activities for modified milk for infants, follow-up formula for infants and young children, and supplemental foods for infants.” That would otherwise be known as Thailand’s implementation of the World Health Organization/United Nations Children Fund International Code of Marketing of Breast-Milk Substitutes.

Continuing with the attack on policies promoting children’s health, the report attacks several countries have introduced policies to reduce obesity among children and adolescents. In Chile, the government adopted a law that requires food products that exceed specified thresholds of sodium, sugar, energy (calories), and saturated fat “to bear a black octagonal ‘stop’ sign for each category with the words ‘High in’ salt, sugar, energy, or saturated fat.” The law prohibits corporations from advertising products that have at least one stop sign to children under the age of fourteen. The report explains this listing by claiming that this law has been costly for corporations.  (Odd, no mention of cost to the government or Chilean public of obesity-related childhood health problems.)

In Peru, a similar regulation “includes a mandatory front-of-pack warning statement on food labels for prepackaged foods that surpass an established threshold for sugar, sodium, and saturated fats, and for all food products that contain trans-fats. The Act also establishes restrictions on advertising and promoting such food products to children and adolescents.” The report labels this as a barrier to trade and asserts that it will continue to raise its concerns with Peru.

Obviously, promoting bacon and booze sales in Muslim countries and sacking public health laws will solve our job-killing trade deficit. So why follow through on those “get tough on China trade cheating” pledges, or trade policy, or tackle the rules in our flawed trade deals that incentivize job-offshoring? Or, could it be that the Trump administration’s notion of “trade barriers” is coming from the same corporations that have shaped our past trade policies and, year after year, get the list of policies they dislike turned into the U.S. government’s list of other countries’ trade barriers requiring elimination?