With NAFTA renegotiations about to begin, Public Citizen has compiled the latest information on how NAFTA’s outcomes measure up to its proponents’ promises. This is the fourth of a four-part expose.

To hear President Trump’s version of NAFTA, Mexico was the big winner. The reality is that NAFTA cost more than two million Mexicans lost their livelihoods related to agriculture. Mexican workers’ real wages are 9 percent lower or $1,500 less than in the year before NAFTA with median manufacturing wages of $2.50 per hour sufficient to support basic needs.

After the first two decades of NAFTA, Mexico’s real gross domestic product per capita growth rate has been a paltry 18.6 percent, ranking 18th out of the 20 countries of Central and South America. In contrast, from 1960 through 1980, Mexico’s per capita gross domestic product grew 98.7 percent. Mexico would be close to European living standards today if it had continued its previous growth rates.

And Mexican taxpayers have forked over $204 million to corporations attacking domestic laws in front of NAFTA tribunals of three corporate lawyers whose decisions are not subject to appeal.

The Mexican people – like people in the United States - were promised that NAFTA would strengthen their economy and raise wages. But after more than 20 years of NAFTA, over half of the Mexican population, and over 60 percent of the rural population, still fall below the national poverty line.

Mexican farmers suffered the worst under the agreement. Before NAFTA, Mexico only imported corn and other basic food commodities if local production did not meet domestic needs. But NAFTA eliminated Mexican tariffs on corn and other commodities and required revocation of programs supporting small farmers. Amidst a NAFTA-spurred influx of cheap U.S. corn, the price paid to Mexican farmers for the corn that they grew fell by 66 percent, forcing many to abandon farming. From 1991 to 2007, about 2 million Mexicans engaged in farming and related work lost their livelihoods. The price of tortillas – Mexico’s staple food – shot up 279 percent in the pact’s first ten years, even as the price paid to Mexican corn farmers plummeted.

With NAFTA renegotiations about to begin, Public Citizen has compiled the latest information on how NAFTA’s outcomes measure up to its proponents’ promises. This is the third of a four-part expose.

Agriculture is supposed to be the winner under NAFTA, right? Um, no: the U.S. agriculture trade balance with NAFTA partners Mexico and Canada fell from a $2.5 billion surplus in the year before NAFTA to a $6.4 billion deficit in 2016. The rising trade deficit in agricultural products has contributed to the loss of more than 200,000 small family farms. Since NAFTA has taken effect, one out of every ten small farms has disappeared. 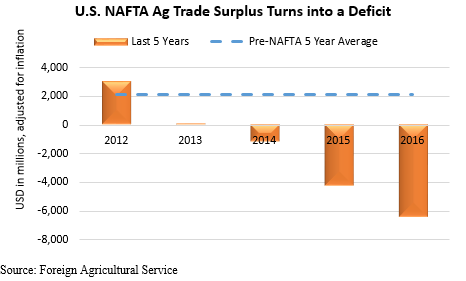 Yes, we exported much more corn to Mexico since NAFTA. But our NAFTA trade deficits in beef/live cattle and vegetables outweigh those gains. And, here’s another conventional wisdom buster: even without NAFTA U.S. corn would not face tariffs in Mexico. Mexico eliminated tariffs on corn for all countries in 2008.

But government data reveals that since 1993, U.S. agricultural imports from NAFTA countries have grown much quicker than U.S. exports to those same countries, resulting in massive agricultural trade deficits. Since the Great Recession, U.S. food imports have grown twice as fast as U.S. food exports.

With NAFTA renegotiations about to begin, Public Citizen has compiled the latest information on how NAFTA’s outcomes measure up to its proponents’ promises. This is the second of a four-part expose.

The key provision in NAFTA grants new rights to thousands of foreign corporations to sue the U.S. government before a tribunal of three corporate lawyers. These lawyers can award corporations unlimited sums to be paid by American taxpayers, including for the loss of expected future profits. These corporations need only convince the lawyers that a U.S. law or safety regulation violates their NAFTA rights. The corporate lawyers’ decisions are not subject to appeal. This system is formally called Investor-State Dispute Settlement.

More than $392 million in compensation has already been paid out to corporations in a series of investor-state cases under NAFTA. This includes attacks on oil, gas, water and timber policies, toxics bans, health and safety measures, and more. In fact, of the 14 claims (for more than $50 billion) currently pending under NAFTA, nearly all relate to environmental, energy, financial, public health, land use and transportation policies – not traditional trade issues.

While this shadow legal system for multinational corporations has been around since the 1950s, just 50 known cases were launched in the regime’s first three decades combined. In contrast, corporations have launched approximately 50 claims in each of the last six years. ISDS is now so controversial that some governments have begun terminating their treaties that include ISDS. 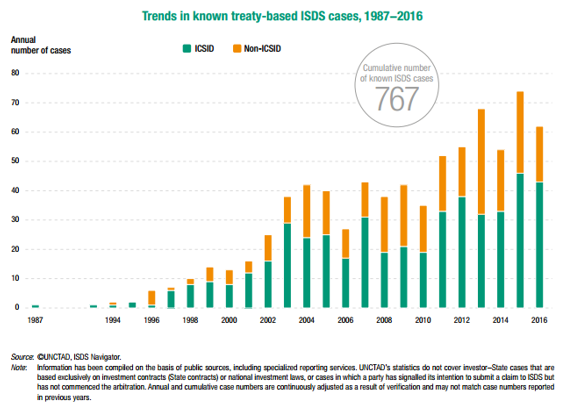 As corporations and law firms become emboldened and more creative in their uses of ISDS, it is likely only a matter of time before U.S. taxpayers are on the hook: as long as NAFTA is in effect, more than 8,500 corporate subsidiaries from Canada and Mexico are empowered to use ISDS to challenge our policies.

To read more about how these tribunals of three corporate lawyers have been operating under NAFTA, please click here.

With NAFTA renegotiations about to begin, Public Citizen has compiled the latest information on how NAFTA’s outcomes measure up to its proponents’ promises. This is the first of a four-part expose.

NAFTA was sold to the U.S. public in 1993 with grand promises of improved trade balances and more jobs. Instead, more than 910,000 specific American jobs have been certified as lost to NAFTA – due to rising imports and offshoring – under just one narrow government program that undercounts the damage.

And the United States’ trade small trade surplus with Mexico and small deficit with Canada crashed into a $134.3 billion deficit – counting both goods and services.   The U.S. goods trade deficit with NAFTA partners Canada and Mexico increased 521 percent – it was $173 billion in 2016 - as annual growth of that deficit was 47 percent higher with Mexico and Canada than with countries that are not party to a NAFTA-style trade pact – a group that includes China. And, annual growth of U.S. services exports to Mexico and Canada since NAFTA has fallen to less than half the pre-NAFTA rate.

As we lost hundreds of thousands of manufacturing jobs, wages were pushed down economy-wide. According to the U.S. Bureau of Labor Statistics, two out of every five displaced manufacturing worker rehired in 2016 experienced a wage reduction, with one out of four taking a cut of greater than 20 percent. For the average manufacturing worker earning more than $38,000 per year, this meant an annual loss of at least $7,700. And as these workers joined the glut of those already competing for non-offshorable service sector jobs, wages in these growing service sectors were also pushed down.

The Center for Economic and Policy Research has discovered that the trade-related losses in wages now outweigh the gains in cheaper goods for the vast majority of U.S. workers.

Lost jobs and lower wages have exacerbated income inequality to levels not seen since the Great Depression. Even proponents of NAFTA admit that trade pressures have likely contributed to today’s historic degree of inequality. The pro-NAFTA Peterson Institute has estimated that 39 percent of observed growth in U.S. wage inequality is attributable to trade trends.