Home Archives Subscribe Back to TradeWatch.org
New Trump Administration Trade Report Sticks to the Status Quo
NAFTA Talks Should Continue Until a Good Deal Is Achieved

With the comment period on proposed China 301 tariffs closing at the end of May, Trump’s senior trade and economic advisers are in Beijing this week seeking major changes to the terms of U.S.-China trade. NAFTA talks must be completed within weeks for a pact to be voted on this year, but only a deal that removes NAFTA’s job outsourcing incentives and adds strong and strictly enforced labor and environmental standards could change the trade deficit trends. Given the failure of the Trans-Pacific Partnership to obtain majority support in Congress, such a major redo of the past U.S. trade agreement model is also necessary for a new pact to be approved by Congress.

“This ever-expanding trade deficit is like the ghost of Trump trade promises past that is haunting the U.S. negotiators now in Beijing trying to remedy the debacle of our China trade policy and those trying to conclude a NAFTA replacement deal that ends the outsourcing incentives and thus could win broad support,” said Lori Wallach, director of Public Citizen’s Global Trade Watch.

The Deficit Is Now Mostly Made Up of Manufactured and Agricultural Goods, With the Oil Deficit Down

Economists who critique the significance of bilateral deficits nonetheless agree that large sustained overall trade deficits can suppress demand and slow economic growth. The overall U.S. trade deficit is mostly made up of manufactured and agricultural goods. Growth in U.S. oil exports and a decline of oil imports since 2011 have masked the deterioration of the non-oil trade deficit. 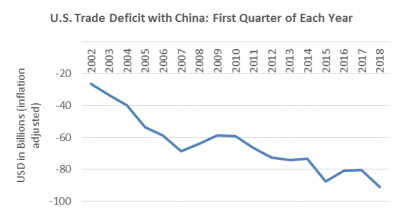