For G-7, Trump’s racism and misogyny are ok, but his trade policies are intolerable 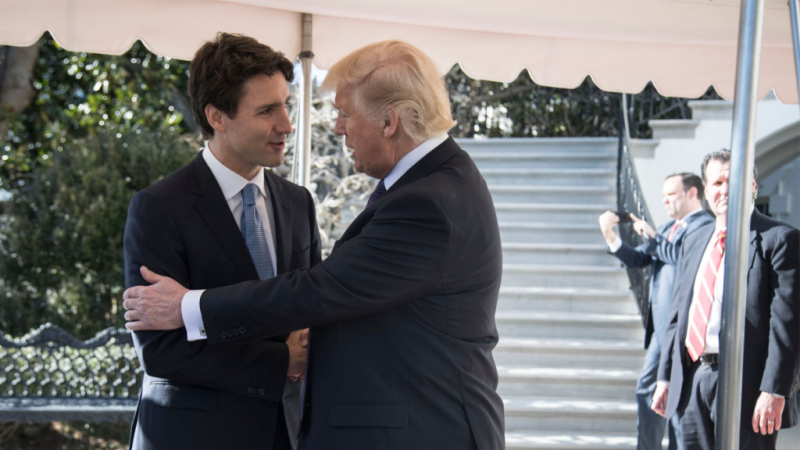 U.S. President Donald Trump seems as welcome at the G-7 picnic as a rabid skunk.

Most G-7 leaders have worked to build warm relationships with Trump, despite his xenophobia, racism, misogyny, climate denialism, warmongering and corrupt business self-dealing. But apparently, taking on the trade status quo was a bridge too far.

That is a bitter irony, given that the trade and financial policies that the G-7 has relentlessly promoted created the political context that helped to make Trump president. Decades of U.S. presidents from both parties and their G-7 counterparts have pushed international economic policies that have created expansive new rights and powers for multinational corporations and hurt working people.

Even as millions of manufacturing jobs were lost, absent was coordinated G-7 action to counter China’s currency manipulation or a unified approach to end Chinese subsidies and other unfair trade practices that, among other problems, fueled the global steel and aluminum oversupply glut.

And as working-class wages declined and income inequality and financial instability grew, the majority harmed by the G-7 version of globalization were told their fate was inevitable.

In the United States, that message was conveyed by Democratic and Republican presidents alike even as the economic and social fallout became increasing difficult to deny. About 4.5 million net American manufacturing jobs have been lost since the 1994 start of the North American Free Trade Agreement (NAFTA) and 2000 trade deal with China related to its admission to the World Trade Organization. Sixty-thousand manufacturing facilities shuttered. And real wages flattened, given that the replacement of the higher-wage manufacturing jobs with lower-wage service sector jobs pushed down wages economy-wide even if one did not lose their job to trade.

Enter Trump, who, whatever else his trade policies may or may not do, ended the bipartisan presidential practice of not seeing or talking about the many Americans who have been harmed by our trade status quo.

Therefore perhaps Trump’s truly unforgiveable sin, finally meriting open ire from G-7 partners, is to demonstrate that the trade status quo is, in fact, not pre-ordained, but rather is a set of policies he is shredding.

Trump may well not achieve the better trade outcomes he promised.

That would require him to stay focused on changing China’s cornucopia of unfair trade practices rather than settling for the usual Chinese promises to buy more U.S. exports. And, unless he can implement a replacement deal that eliminates NAFTA’s investor-state outsourcing incentives and adds strong labor and environmental terms with swift and certain enforcement to raise wages, companies will keep moving jobs to Mexico to pay workers a pittance and dump toxins and import those products back for sale here.

And, the U.S. corporate lobby is in overdrive working against any attempt to change the trade policies to preserve the status quo. Doing so is apparently a higher priority for them than preserving the Republican congressional majority. The Koch Brothers just announced a campaign designed to line up congressional Republicans against Trump’s trade agenda before the midterm elections, even as polls show GOP and Independent voters support that agenda.

Plus, Trumpian chaos has led to Trump caving on well-thought-out policies, such as the China trade enforcement action aimed at dismantling the technology theft essential to the China 2025 agenda to dominate industries of the future. That approach was revived, for now.

But whether or not Trump’s trade policies succeed, the other G-7 leaders should reflect on the painful lesson of Trump’s rise and that of other authoritarian politicians who wrap themselves in economic populism: Political leaders who fail to offer a new approach on trade and the related economic policies that provide greater economic security for all only serve to alienate more and more people who are left behind, creating fertile political ground for more Trumps.

Really all we have to remember is what Ross Perot said!! That giant sucking sound and how many millions of jobs left our country and may still be leaving????

Really all we have to do is remember what Ross Perot said! Listen for that giant sucking sound! So how many millions of jobs have left and still leaving???

There is nothing we manufacture in the USA and the major corporations like it that way! These people who oppose in traffics don't need a job, they wear clothes made in a third world country, shoes from Vietnam and drive in a car made in Germany or Mexico.
We can't impose traffics on China because we need their cell phones and computers.
We can't find a product made in the USA.

Ross Perot said!! That giant sucking sound and how many millions of jobs left our country and may still be leaving? He said 3 Million manufacturing job would leave, boy was he wrong it is over 7.5 Million. Now our major aerospace and defense companies are moving jobs to Mexico. Obama said that General Motors is alive due to government bail out, wonder where the largest GM plant is located, it is Canada. Their second largest plant is China.

It's not clear how this is about racism. The majority of Americans who suffered because of this agenda, losing their jobs, are white. (We lost over 5 million manufacturing jobs alone since 2000.)It was the Clinton administration that stuck us with NAFTA. The TPP was the Obama administration's effort.

Your article begins with calling our President all kinds of names, many of which are not true, or, if true, have been true of every president we have ever elected. Then you describe his actions and efforts to correct practices in which formerly national and but now multinational companies have decimated the manufacturing base in our country. At the end you predict that his behaviour at the G-7 will be "cringe-worthy exploits". What are you doing, exactly? As far as I am concerned he's from New York; he is in my opinion trying to do right by us citizens; he has not yet gone to war and I do not think he wants to go to war. Give it up on the bashing.

The only way America can or will restore All the entitlements that have been usurped from the hardworking people's in the U.S., is by standing-up to these big,Big,BIG multi-inter-national corporate mega conglomerate Monopolies, is to Unite with those same Union's oversea's that work for these here same corporate institution's & exert pressures on these corporate parasites to deal fairly with integrity & equality in & for the American nation & its People's!! United we stand thru strength when we join with the UNION's Abroad to voice our grievances!!

True, we need a global movement of worker/citizens to stand up to corporate -- and banking --interests. Trade agreements favor corporations. They even allow corporations to sue governments (taxpayers) if those governments enact labor or environmental laws that protect citizens, but cut into corporate profits. Economic inequality has sky-rocketed in the past few decades, not just in the U.S., but Spain, Italy, Greece, and other parts of Europe. While the most jobs have been lost to changing technology, we need trade agreements that favor "We,the people". Do not expect Pres. Trump and a handful of billionaires to change the trajectory.

Thanks For sharing this Superb article.I use this Article to show my assignment in college.it is useful For me Great Work.

technology theft as 'essential' ? as essential! are you sure? essential? what kind of assertion is this? by what method of certitude could it be asserted as certitude? without demonstrable proof, what then would be its connotations? who would most accept and hold to its assertion?

I have read your blog it is very helpful for me. Thanks for sharing such wonderful information with us.

Claim, you got a nice website post. Really thanks! Really Great. Important thanks for the blog. Much thanks again. Great. Actually loved that post. Thanks Again. Great.

I enjoy and appreciate your blog post. Significantly obliged.This is one great post.Thanks Again.I enjoy you discussing that blog.Really many thanks! Awesome. penisextenderr.com

Very good written article. It will be supportive to anyone who utilizes it, including me. Keep doing what you are doing – can’r wait to read more posts. certificados ssl

Quality articles is the important to attract the people to pay a visit the website, that?s what this web site is providing. happy diwali pictures

Thank You very much...

Thank You For this post. It helped me a lot. I have read it many times but this website helped me learn better and understand to0...

Thank You Very much

very good information here i get.