NAFTA Notice: A Final Deal Must Be Judged on Whether It Will Stop NAFTA’s Serious Ongoing Damage 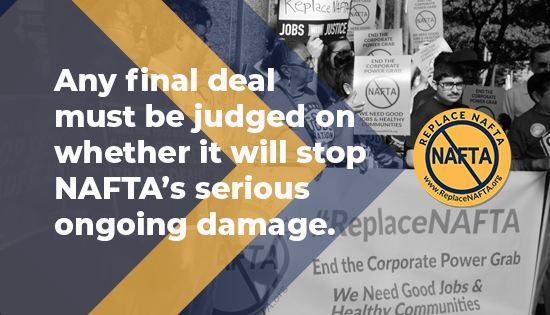 Note: The Trump administration gave notice to the U.S. Congress on Friday, Aug. 31 of its intent to sign a renegotiated North America Free Trade Agreement (NAFTA). Aug. 31 is the last day to give notice for a deal to be signed by outgoing Mexican President Enrique Peña Nieto. The U.S. reached agreement with Mexico on new terms, but talks with Canada are ongoing. The text of any deal would be made public only after 30 days’ notice. While much attention has been given to whether various deadlines can be met and the political and legal implications of various scenarios, the fundamental question is whether the content of a new agreement can halt NAFTA’s ongoing damage:

“We understand that progress has been made on some essential NAFTA changes we have long sought, like razing NAFTA’s investor tribunals where multinational corporations have grabbed $392 million in compensation from North American taxpayers after attacking environmental and health policies. But swift and certain enforcement of what we understand are improved labor standards is lacking and must still be added or U.S. corporations will keep outsourcing jobs to Mexico to pay workers a pittance, dump toxins and import products back to the U.S. for sale here.

Given the encouraging news about some of the key NAFTA changes we have long sought, we are closely monitoring the ongoing process with respect to improvements in labor enforcement that are necessary to counter NAFTA job outsourcing. We also closely monitoring the ongoing negotiations with Canada where several important consumer protection issues are at stake, including extended monopoly rights for pharmaceutical corporation that would increase medicine prices. Ultimately, we must see the final text to know whether our demands have been met.

Any final deal must be judged on whether it will stop NAFTA’s serious ongoing damage, given the pact now helps corporations outsource more jobs to Mexico every week (Almost one million American jobs have been government-certified as lost to NAFTA) and launch new NAFTA investor attacks on health and environmental laws after already $392 million has been grabbed from taxpayers.

As we have made clear since Day One of renegotiations, the only agreement that can achieve broad support must end NAFTA’s job outsourcing incentives and Investor State Dispute Settlements tribunals – where corporations can attack our laws – and add strong environmental and labor terms with swift and certain enforcement to raise wages.

It may seem improbable that this administration could be making changes progressives have long sought, but public anger over outsourcing has made it impossible for business-as-usual trade agreements to get through Congress. The big questions are whether Trump will deliver a final deal strong enough to meet his election promises to return manufacturing jobs and cut the large NAFTA trade deficit and if so, whether Republicans in Congress would buck the corporate lobby and support a deal that would end NAFTA’s job outsourcing incentives and ISDS tribunals where corporations can attack our laws and add strong environmental and labor terms with swift and certain enforcement to raise wages.”

U.S. Trade Deficit for First Half of 2018 Likely to Be Largest Recorded in Years, With China Deficit on Track to Be Highest First-Half Ever Recorded 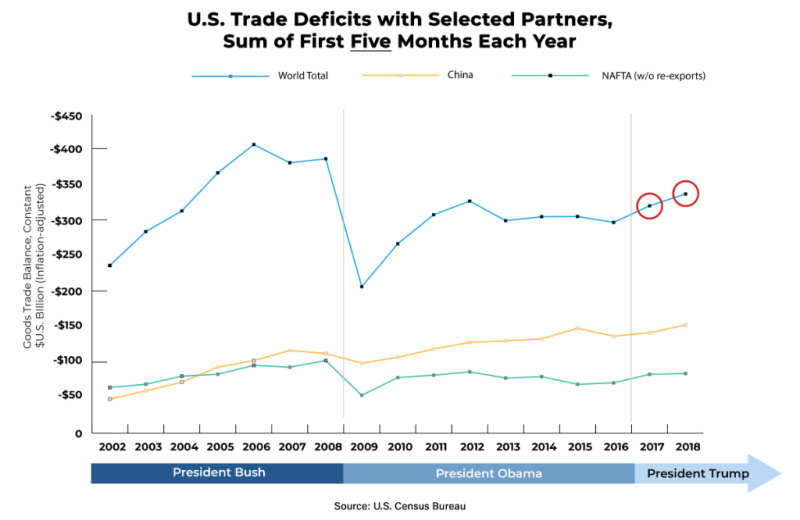 Trump’s $52 billion trade deficit reduction claim seems to be premised on a misleading comparison between an annualized change in the goods and services trade balance between the first quarter of 2018 (a $902 billion deficit) and the second quarter of 2018 (a $850 billion deficit.) But the U.S. goods trade deficit in the first quarter of 2018 was the largest first-quarter deficit since before the financial crisis, meaning a decline from that in the next quarter says very little about the overall trend. This comparison, like changes in month-to-month deficit figures that often are reported in the press, obscure actual trends. The monthly data are volatile, especially now, as U.S. exporters race to beat retaliatory tariffs on U.S. goods. Reviewing the same five-month goods trade balances shows that U.S. deficits with the world and with China were higher over the first five months of 2018 compared to the first five months of 2017, which in turn were higher than the first five months of 2016, even after adjusting for inflation.  (All figures in this memo are inflation-adjusted, so they represent the actual growth in the deficit expressed in constant dollars.)

Many trade watchers focus on the change in month-to-month numbers, especially now as they study whether newly imposed tariffs are altering trade flows. But monthly trade figures are volatile, and the “seasonal adjustment” done by Census does not control for factors such as U.S. exporters trying to beat the imposition of various countervailing tariffs. Thus, the main storyline when the May trade figures were released was that the monthly deficit with the world was the lowest since October 2016. But missing in this assessment was that U.S. trade deficits with the world and with China were higher during the first five months of 2018 compared to the same period in 2017, which were in turn higher than the first five months of 2016, even after adjusting for inflation. A more complete picture of U.S. trade balance trends is achieved by comparing the year-to-date totals through the same point of previous years. This removes the need for seasonal adjustment, given the data cover the same months each year. (We focus on goods balances rather than total goods and services in this memo because services data broken down by trading partner lags the goods data by months. The services data by partner for the first half of 2018 will not be available until September 2018.)

NAFTA Balances and the Skew from Re-Exports: Yes, We Have A Deficit With Canada

Accurately accounting for NAFTA trade balances is complicated. Since NAFTA went into effect, the share of U.S. exports to Mexico and Canada that are re-exports of goods made in other countries has jumped from 5 percent in 1993 pre-NAFTA to 20 percent in 2017. (Re-exports are goods imported, for instance, from China into the United States and then exported to Canada without change. In 2016, one-third of U.S. re-exports to Canada were produced in China.) Counting re-export of foreign-made goods in U.S. export data inaccurately inflate export numbers. But to get an accurate balance, the import side of the equation also must be considered. The United Nations’ trade database, called Comtrade, provides official government data on domestic exports (i.e., not including re-exports). Consider the controversial question of whether the United States has a trade deficit with Canada. The Comtrade data show $221 billion in U.S. domestic exports to Canada and $266 billion in Canadian domestic exports to the United States in 2016, the most recent year that can be compared to available services data. That yields a $45 billion U.S. goods trade deficit with Canada. After subtracting the $24 billion U.S. services trade surplus with Canada documented by the U.S. Bureau of Economic Analysis, the United States still had a $21 billion goods and services trade deficit with Canada in 2016. When this issue came to the forefront earlier this year, analysts who did not subtract re-exports instead calculated a $7 billion U.S. surplus with Canada for 2016.

A Deeper Dig into the Data: About Those Soy Exports

Several deeper cuts of the data are worth considering. The first relates to what the United States is exporting, which to the world in 2017 was $138 billion of agricultural goods and $1.1 trillion of manufactured goods. There has been breathless coverage of how China’s retaliatory tariffs have impacted U.S. soybean exports, which are noted to be the second largest U.S. export to China after civilian aircraft, engines and parts. What this reveals is the lack of U.S. value-added exports to China after that nation’s accession to the World Trade Organization (WTO). After soybeans, the top 15 U.S. export products to China include commodities like crude oil (No. 4), copper scrap ( No. 7), propane (No. 8), aluminum scrap (No. 11), wood pulp (No. 12), cotton (No. 14) and paper waste (No. 15). The giant trade deficit with China is the result of exporting only $120 billion worth of goods in total. However, a large portion are low value-added commodities. Of the top 15 U.S. export products to China, $24 billion represent such goods, and only $31 billion, or 56 percent, represent high value-added product categories like cars and electronics. Meanwhile, 84 percent of Chinese imports into the United States are in these high- value categories. The United States runs over a $100 billion deficit with China in electrical machinery alone.

The second deep dive relates to the impact on wages from the composition of the goods we import and export. One way to view this is by checking the subset of the data on our manufacturing trade balance. Even the most orthodox economists admit that trade changes the composition of jobs – and thus the wages – available for U.S. workers. As the grandfather of modern trade economics, Nobel-Prize winning economist Paul Samuelson found in one of the last papers he published before his death, offshoring of higher-paid jobs to countries like China and India can cause U.S. workers to lose more in wages than they gain from access to cheaper imported goods. The downward pressure on wages is still the predominant feature of the U.S. labor market and trade is one of the significant factors fueling it and one of the only ones that can be altered via policy changes. The Center for Economic and Policy Research (CEPR) revealed that when comparing the lower prices of cheaper imported goods to the income American workers lost from low-wage competition under current trade policy, by 2001 the trade-related wage losses were larger than gains from access to cheaper goods for the majority of U.S. workers. CEPR found that those without college degrees (58 percent of the workforce) had likely lost an amount equal to 12.2 percent of their wages under NAFTA-style trade, even after accounting for the benefits of cheaper imports. That meant a net loss of more than $3,965 per year for the average worker. Despite this, defenders of the trade status quo dismiss the relevance of trade deficits, especially given strong economic growth figures in an economy running near full employment. Yet, while headline economic indicators are strong, damage that is occurring may remain invisible. When the tide goes out on a hot economy, the damage in lower wages and the disappearance of middle-class jobs for the majority of Americans without college degrees may be seen and felt acutely, just as it was after the 2008-09 financial crisis.