The United States is on track to post a record high goods trade deficit for the first three quarters of 2018, contradicting President Donald Trump’s midterm campaign trail triumphalism on trade.

Instead of the speedy reduction in the trade deficit that Trump promised as a focal point of his presidential campaign, during his presidency, the U.S. trade deficit with the world, China and North American Free Trade Agreement (NAFTA) nations has steadily grown. The data underscores that the Trump administration has chosen not to employ all of the tools at its disposal to bring down the trade deficit.

When the U.S. Census Bureau releases nine-month data Friday, the global and China deficits are likely to be higher than the nine-month level of Trump’s first year, which was higher than the nine months of President Barack Obama’s last year. The U.S. also is on track to end 2018 with the highest goods trade deficit with NAFTA partners since 2008. This is being driven by increasing imports from both Canada and Mexico since 2016, but especially from Mexico this year.

This note provides comparison data for the cumulative third-quarter 2018 deficit relative to past years. This offers a clearer picture of overall trade flow trends than changes in month-to-month numbers. Monthly trade figures are volatile, and the “seasonal adjustment” of the monthly data done by the Census Bureau does not control for key factors, such as U.S. exporters trying to speed up shipments to avoid imposition of various countervailing tariffs. We focus on goods balances because services data by country lags the goods data by months. (The relevant services data will not be available until December 2018.) All figures are adjusted for inflation, so they represent changes in trade balances expressed in constant dollars. 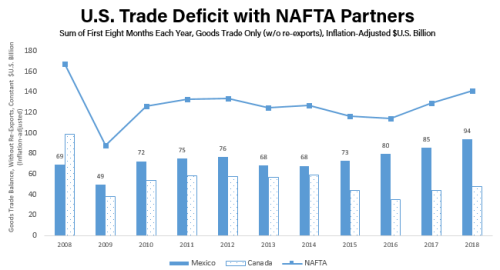 When Friday’s data is released, we will post updated nine-month cumulative data, which also will be available on our Trump trade deficit tracker. But year-to-date trends through the first three quarters of 2018 likely will be in line with the following major trends observed through the first eight months of the year:

The growth of the NAFTA trade deficit has been overshadowed by focus on U.S.-China trade conflicts. But it is notable that the growth of the U.S.-Mexico deficit is accelerating, with 10 percent growth from the first eight months of 2017 relative to the same period in 2018 compared to 7 percent growth over that period from 2016 to 2017. The U.S. deficit with Canada is still growing, but the rate has not accelerated.

This data is likely to color the debate next year as a renegotiated NAFTA heads toward congressional consideration. Public Citizen’s analysis of the NAFTA 2.0 text revealed some improvements progressives have long demanded, damaging terms long opposed and important unfinished business. The analysis showed that fixing NAFTA’s trade-deficit-raising terms that incentivize U.S. firms to outsource jobs to Mexico to pay workers poverty wages, dump toxins and bring their products back here for sale remains a work-in-progress.

The latest trade data spotlights actions the Trump administration has chosen not to take to bring down the U.S. trade deficit.

The data arrives on the heels of Trump’s Treasury Department failing to label any country a currency manipulator. An analysis released recently by Public Citizen shows how the Trump Treasury Department’s decision to rely on reporting criteria created by the previous administration has ensured no action on the issue, despite then-candidate Trump pledging to crack down on countries that gain trade advantages by distorting currency values.

Will the U.S. Treasury’s Imminent Report to Congress on Trade Partners’ Currency Practices Once Again Fall Short of Its Mandate?

A Critical Tool to Address Currency Manipulation and Stem Record-Setting Trade Deficits Has Been Shirked by the Trump Administration, a New Public Citizen Analysis Shows

The Trump administration will release its latest report on trade partners’ currency practices imminently. Like its prior three iterations of this semi-annual report mandated by Congress to identify countries whose distortion of currency values to gain trade advantages must be addressed, it is unlikely any country will be listed. A new analysis by Public Citizen shows how the Trump Treasury Department’s decision to rely on reporting criteria created by the previous administration has ensured no action on the issue, despite then-candidate Donald Trump pledging to crack down on countries that gain trade advantages by distorting currency values.

Public Citizen’s analysis shows that the Treasury Department is not taking full advantage of the tools available to put countries on notice for damaging currency practices. The latest “Report to Congress on the Foreign Exchange Policies of Major Trading Partners of the United States” is expected this week.

“One of Trump’s most emphatic campaign promises was to declare China a currency manipulator on Day One and crack down on any country misaligning its currency to cheat on trade, but Trump’s Treasury secretary has chosen to rely on criteria created by the previous administration that ensure no action is taken,” said Lori Wallach, director of Public Citizen’s Global Trade Watch.

Large U.S. structural trade deficits consistent with misaligned currencies have grown in recent years. Data released Friday by the U.S. Census Bureau show that the U.S. merchandise trade deficit with the world over the first eight months of 2018 is the highest in the decade since before the 2008-09 financial crisis.

Drawing in part from analysis by economists at the Peterson Institute for International Economics and the Council on Foreign Relations, Public Citizen recommends several changes to Treasury’s reporting regime to better align the review methodology with statutory obligations. This includes broadening the number of countries analyzed by eliminating self-imposed, arbitrary cutoffs on which countries are investigated, reviewing countries’ overall policy stances rather than immediate practices and reporting on countries’ efforts to improve transparency on foreign exchange interventions.

“While the NAFTA 2.0 deal sets an important precedent by being the first to include a currency provision in its main text, it provides no mechanism for actually disciplining countries that manage their currency values in a way that affects trade. The Treasury reporting process, on the other hand, is tied to a set of remedial actions and covers many more countries. The Trump administration must take full advantage of the authority Congress has provided to influence the foreign exchange practices of trading partners through the semi-annual reporting process,” Wallach said.

Public Citizen Analysis: How the New NAFTA Text Measures Against Key Changes We Have Demanded to Stop NAFTA’s Ongoing Damage

Here is our initial 14-page analysis of the NAFTA 2.0 text, following up on the statement from Sunday night. We have reviewed how the text measures up to the changes to NAFTA that Public Citizen and many other progressive organizations have long demanded. After some digging, which has been exhausting giving the 900 pages of text and annexes, we have boiled down whole chapters into bulleted highlights and lowlights and assessed whether demands are met or there are mixed outcomes or it’s too soon to know or there’s been a fail.

Overall, the NAFTA 2.0 text reveals a work in progress with some improvements for which we have long advocated, some new terms that we oppose and more work required to stop NAFTA’s ongoing job outsourcing, downward pressure on wages and environmental damage.

The new text isn’t a transformational replacement of the entire corporate-rigged U.S. trade agreement model that NAFTA launched in the 1990s. But at the same time, in key respects, this deal is quite different from all past U.S. free trade agreements. The revised deal could reduce NAFTA’s ongoing job outsourcing, downward pressure on our wages and environmental damage if more is done to ensure the new labor standards are subject to swift and certain enforcement, and some other key improvements are made. There’s a ways to go between this text and congressional consideration of a final NAFTA renegotiation package in 2019.

Important progress has been made with the removal of corporate investor protections that make it cheaper and less risky to outsource jobs and a major reining-in of NAFTA’s outrageous Investor State Dispute Settlement (ISDS) tribunals under which corporations have grabbed hundreds of millions from taxpayers after attacks on environmental and health policies.

Termination of ISDS between the U.S. and Canada would eliminate 92 percent of U.S. ISDS liability under NAFTA and the lion’s share of total U.S. ISDS exposure overall. This, combined with the major roll back of corporate rights and ISDS coverage between the U.S. and Mexico would prevent many new ISDS attacks on domestic environmental and health policies after more than $390 million has been paid to corporation by taxpayers to date. That even this corporate-compliant administration whacked ISDS means future presidents cannot backslide and also sends a powerful signal to the many nations worldwide also seeking to escape the ISDS regime.

A lot more work remains to be done: Unless strong labor standards and environmental standards are made subject to swift and certain enforcement, U.S. firms will continue to outsource jobs to pay Mexican workers poverty wages, dump toxins and bring their products back here for sale.

Despite Donald Trump’s “Buy American/Hire American” rhetoric, the new deal maintains NAFTA’s waiver of Buy American rules that require the U.S. government to procure U.S.-made goods, so unless that gets fixed more U.S. tax dollars and more U.S. jobs will be outsourced.

The new deal grants pharmaceutical corporations new monopoly rights so they can keep medicine prices high by avoiding generic competition. This could undermine the changes we need to make medicine more affordable here and increase prices in Mexico and Canada, limiting access to lifesaving medicines.

Areas of progress include a first-time-ever innovation of conditioning trade benefits for a percentage of autos and auto parts on the workers producing them being paid $16 per hour or more. Terms that forced countries to continue to export natural resources that they seek to conserve are eliminated. Longstanding safety and environmental problems relating to Mexican-domiciled trucks’ access to U.S. roads are addressed. Rules of origin that allowed goods with significant Chinese and others non-North American value were tightened.

Americans have suffered under NAFTA’s corporate-rigged rules for decades. Nearly one million U.S. jobs have been government-certified as lost to NAFTA, with NAFTA helping corporations outsource more jobs to Mexico every week. The downward pressure on U.S. workers’ wages caused by NAFTA outsourcing has only intensified as Mexican wages declined in real terms since NAFTA, with Mexican manufacturing wages now 40 percent below those in coastal China.