Home Archives Subscribe Back to TradeWatch.org
Signing of NAFTA 2.0 Does Not End Fight for Progressive Improvements to the Agreement
New Report on 25 Years of NAFTA’s Damaging Outcomes Underscores the High Stakes for Next Year’s Battle Royale Over NAFTA 2.0

With the signing of the renegotiated North American Free Trade Agreement (NAFTA) on Nov. 30 as the migrant crisis at the border escalates, the Labor Council for Latin American Advancement (LCLAA) and Public Citizen’s Global Trade Watch released a timely analysis of the North American Free Trade Agreement’s (NAFTA) disproportionate damage to U.S. Latinos and Mexican workers, and whether the NAFTA 2.0 deal would stop it.

“While President Trump’s manipulation of grievances over trade and immigration brought him to power, absent from his worldview is the reality that NAFTA was developed by and for multinational corporations seeking to pay workers less and has hurt both U.S. and Mexican workers,” said Hector Sanchez, executive director of LCLAA at a Press Club event today. “Indeed, NAFTA’s destruction of millions of Mexican small farmers’ livelihoods and the pact’s race-to-the-bottom wage incentives have pushed many in Mexico to search for work outside their home country.” 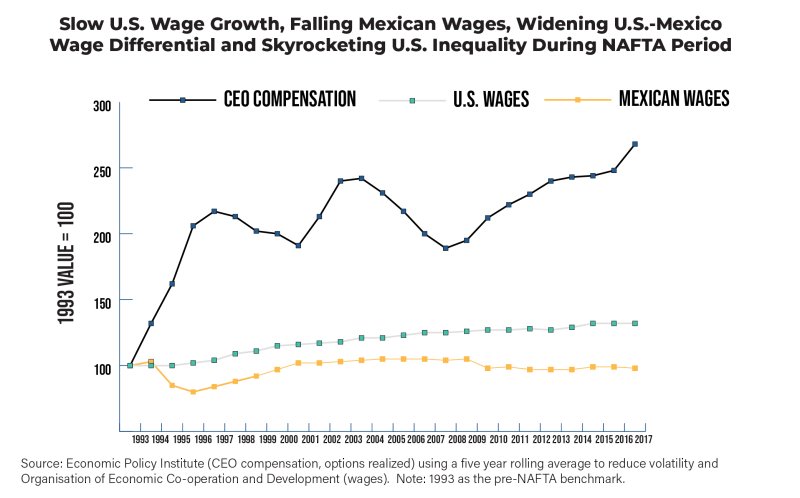 Titled “Fracaso: NAFTA’s Disproportionate Damage to U.S. Latino and Mexican Working People,” the report’s findings upend President Donald Trump’s xenophobic NAFTA narrative that blames Mexican workers for harming U.S. workers. The report’s analysis of the NAFTA 2.0 text in the context of the ongoing NAFTA-related damage to Mexican and U.S. workers alike spotlights why further improvements are necessary before a final NAFTA 2.0 deal can achieve broad support in Congress next year. The report was produced through a partnership that united LCLAA’s decades of advocacy for Latinos and Public Citizen’s decades of analysis of trade pacts and their impacts.

“NAFTA not only didn’t deliver on its proponents’ rosy promises of more jobs and higher wages, but its ongoing damage ended decades of bipartisan congressional consensus in favor of trade pacts,” said Lori Wallach, director of Public Citizen’s Global Trade Watch. “For a final NAFTA 2.0 package to get through Congress next year, the signed deal will need more work so its labor standards are subject to swift and certain enforcement and the other improvements are made to stop NAFTA’s ongoing job outsourcing, downward pressure on wages and environmental damage.”

The data on NAFTA’s disproportionately negative effect on both Mexican and U.S. working people undermine Trump’s nationalist critique while also spotlighting why more-of-the-same neoliberal NAFTA policies are equally unacceptable. Among the report’s findings:

This report makes clear that neither status-quo neoliberalism nor Trump’s anti-Mexico nationalism is in the interest of working people in the United States or Mexico.

“Tens of millions of Mexican and U.S. Latino workers have been hurt by NAFTA – from the factory worker in El Paso, Texas, who lost her livelihood making blue jeans after the apparel industry moved to Mexico to take advantage of low wages, to the Mexican farmer in Chiapas who can barely make ends meet as the prices paid for his corn plummeted after subsidized U.S. corn flowed into Mexican markets after NAFTA,” said Yanira Merina, national president of LCLAA. “It is the future of these workers, their families and their communities that will be determined by whether there is a new NAFTA deal that can raise wages and replace NAFTA’s race to the bottom with fair trade.”

“NAFTA 2.0 labor enforcement must be greatly strengthened,” said Guillermo Perez, labor educator at the United Steelworkers and president of the Pittsburgh LCLAA. “It is in the interest of workers in all three countries to ensure that Mexico adopts strong workers’ rights provisions and monitors and enforces their implementation. Workers in Mexico must be able to form labor organizations and collectively bargain for better wages and working conditions to stop downward pressure on wages in Canada and the United States.”

“Trade agreements like NAFTA, which are not fair and leave workers in the U.S., Canada and Mexico out in the cold, have caused immense pain and disruption in the lives of everyday working people in all three countries. The NAFTA 2.0 that was signed will not stop the wage suppression in Mexico and the related outsourcing from the U.S. and Canada. Our future, the future of manufacturing and the future of workers’ lives depends on getting trade policy right,” said Dora Cervantes, general secretary-treasurer at the International Association of Machinists & Aerospace Workers.

The full report is available here.