The 2018 annual trade data released by the U.S. Census Bureau last week show record-setting U.S. goods trade deficits of $879 billion with the world, $419 billion with China and $215 billion with NAFTA countries, capping two years of steadily rising trade deficits for the Trump administration that contrast with candidate Donald Trump’s promises to quickly reduce them.  The rate of growth in the trade deficit has increased during the Trump era, with the increase from 2017 to 2018 greater than the change from 2016 to 2017. (All figures below are adjusted for inflation to a base year of 2018. Figures represent trade balances expressed in constant dollars, so, for years prior to 2018, the numbers are different than the data unadjusted for inflation that is provided by Census.)

“More important than Trump failing on the trade-deficit-reduction benchmark for success he set on trade is that he focus on addressing the root causes by securing a China trade deal that’s not about short-term soy and gas sales but addresses structural issues fueling the deficit and by working with congressional Democrats to improve the NAFTA so it has a chance to pass,” said Lori Wallach, director of Public Citizen's Global Trade Watch. “The growth of the trade deficit is accelerating in part because of early enactment of government policies like Trump’s tax package that incentivized production and job outsourcing while the major trade reforms are just now coming to a head.”

The annual 2018 trade data show the highest-ever recorded U.S. trade deficit with China. The U.S. deficit with China has grown during both years of the Trump administration, spotlighting why many China trade and foreign policy experts are urging the president not to cave in and accept a quick and meaningless China trade deal that fails to secure fundamental reforms necessary to reduce the deficit.

The data also show additional imports from Mexico during the Trump administration, especially in the auto sector, driving up the trade deficit with North American Free Trade Agreement (NAFTA) partners to its highest level since 2008. The data bolster congressional Democrats’ calls for the revised NAFTA deal that Trump signed to be improved, including by ensuring swift and certain enforcement of strong labor and environmental standards to reduce the incentive to outsource jobs to Mexico.

The annual data is also available on our Trump trade deficit tracker. The following major trends were observed through 2018: 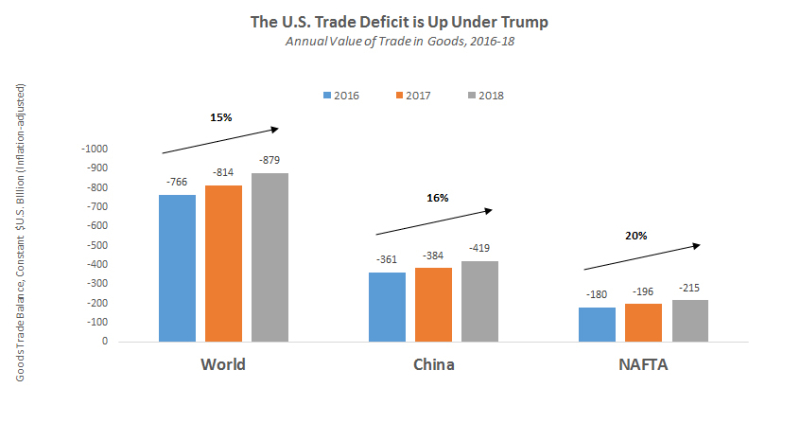 U.S. Trade Deficit is Worse Than It Looks

U.S. energy exports are masking deepening manufacturing deficits. In 2008, oil and gas made up a greater share of the U.S. trade deficit than all other products combined. Since then, the deficit in oil products has plummeted and now makes up only 5 percent of the deficit with the United States projected to be a net energy exporter next year. Meanwhile, the deficit in manufactured goods has expanded and the surplus in agricultural products has declined. But for the boom in domestic energy production and exports, the overall trade deficit would have been much worse.

Breathless coverage this past year of the impact of Chinese tariffs on U.S. soybeans, the second-largest export to China (after aerospace equipment) betrays the depletion of the U.S. export base. Not only do we now import $4 worth of goods for every $1 we sell to China, but low-value-added commodities like soybeans, cotton, oil, gas, metal scrap, wood pulp and paper waste make up most of the top 15 U.S. export products to China. In fact, the latest data available from 2017 on this measure show that 43 percent of our exports to China are low-value-added products, while only 6 percent of imports from China are in low-value-added categories. If more high-value-added products are produced offshore, our structural trade deficit will persist.

NOTE: We provide comparison data for cumulative deficits for 2018 relative to past years because this offers a clearer picture of trade trends than changes in month-to-month numbers. Monthly trade figures are volatile, and Census’ “seasonal adjustment” of it cannot control for unpredictable factors, such as exporters shifting shipment dates to avoid imposition of various countervailing tariffs. We focus on goods trade balances because services data by country lags the goods data and won’t be available until April 2019. The value of goods trade is also more than triple that of services trade, so has more impact on overall trends.

Thank for posting such an informative article.