The delta variant-fueled COVID-19 wave that is slamming communities nationwide and flooding ICUs is a glimpse of the endless pandemic to come unless the Biden administration secures a waiver to significantly boost production of vaccines, tests, and treatments; requires firms to share vaccine recipes; and helps to fund a major increase in COVID-19 medicine production worldwide.

This scarcity is not only unjust and guarantees needless deaths and economic pain, but increases the chances of vaccine-resistant variants emerging that put the whole world back to square one on immunization.

The global shortage of vaccines can be traced to monopolies that empower a few vaccine makers to control if, how much, and where vaccine doses are produced. The World Trade Organization (WTO) requires 159 countries to enforce patent and other so-called intellectual property barriers to greater medicine production.

Regular Public Citizen News readers will recall that the Biden administration made history in May when it reversed the Trump administration’s position and supported temporarily waiving the WTO pharmaceutical monopoly terms to save lives amidst the COVID-19 crisis. American support for the “TRIPS Waiver” greatly elevated the issue and influenced some allies to follow suit.

However, since then little progress has been made thanks to a handful of wealthy countries opposing the waiver, especially Germany and the European Union on its behalf.

Following the U.S. announcement of support, GTW joined with a coalition of U.S. and international civil society organizations to pressure German Chancellor Angela Merkel to stop blocking the more than 130 countries that want the waiver. As Merkel traveled to Washington, D.C., in July for her final White House visit, she was met with dozens of protests organized by Public Citizen, Citizens Trade Campaign (CTC), and allied organizations focused on more than a dozen German consulates nationwide. 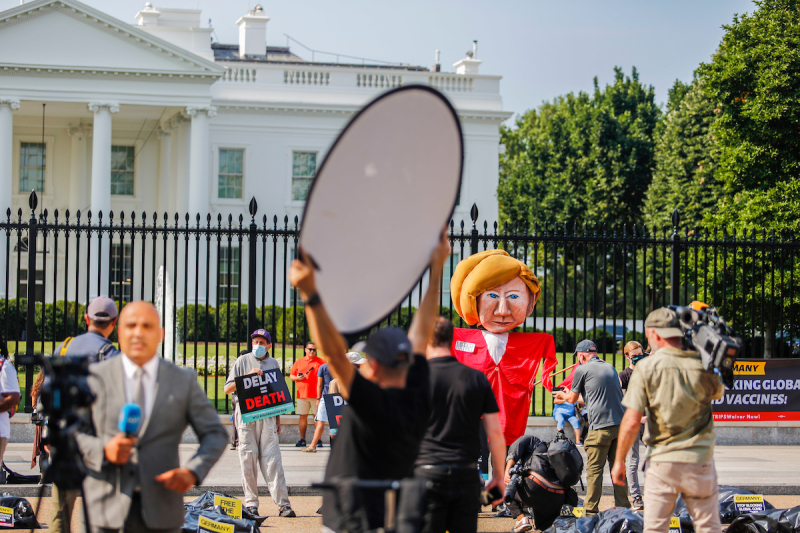 Protesters arranged body bags outside the White House during a protest calling on German Chancellor Angela Merkel to stop blocking an emergency waiver of intellectual property rules needed to increase global production of COVID-19 vaccines and treatments that would help save millions of lives Thursday, July 15, 2021 in Washington. The action in support of the “TRIPS waiver” was one of more than a dozen demonstrations in the U.S. capitol and at German consulates across the nation timed with Merkel’s visit to the United States this Thursday. While President Biden and a majority of the world’s governments support a TRIPS waiver, Germany continues to obstruct it. (Eric Kayne/AP Images for Citizen Trade Campaign)

The Chancellor was directly challenged by GTW protestors—including one inside a large Merkel puppet—as she arrived for an honorary degree at Johns Hopkins that students petitioned against, given her opposition to the waiver. CTC, GTW, and allies mobilized a huge banner on helium balloons depicting the White House in the background. Body bags were also laid outside the White House the day of the Biden-Merkel meeting, generating more press. Heads of major U.S. organizations wrote to Biden and spoke at a press conference organized by GTW to publicly urge him to exert U.S. leadership at the summit and resolve the German opposition.

Public pressure put the TRIPS waiver on the agenda for the summit, but Biden apparently did not expend the political capital necessary to convince the Chancellor to move. Nor has the administration exhibited the leadership at the WTO.

Waiver proponents had called for progress by the end of July, but with none in sight, the WTO disbanded for a six-week vacation against the WTO Director-General’s guidance. “The WTO is showing itself to not just be useless in the fight against COVID, but an actual hindrance,” said GTW Director Lori Wallach. “The WTO’s shameful inaction on the COVID waiver could be the final undoing of an organization that already was suffering a major legitimacy crisis and on its last legs.”

According to Oxford University, more than 3.3 million people worldwide have died from COVID-19 since India and South Africa first proposed the WTO waiver in October 2020. Meanwhile, White House coronavirus czar Jeff Zients appears to have no plan to end the pandemic. GTW and almost 30 partner organizations – including Be A Hero, Amnesty International USA, and Avaaz – are joining forces in a petition to Zients demanding that he:

Biden is reportedly planning a COVID-19 summit in conjunction with the United Nations General Assembly in September. According to Wallach, “President Biden’s global COVID summit will only be a success if he uses it to exert global leadership to get the WTO TRIPS waiver done and secure commitments from other countries to help fund the necessary scale-up in developing countries’ production of COVID vaccines to end the pandemic.” More than 130 countries support the WTO waiver, and opponents are facing increasing political pressure and moral outrage. Chancellor Merkel’s upcoming retirement creates opportunities for our German allies to end their country’s obstruction of the waiver and thus end the EU’s opposition. But while there is hope, there is also peril. All eyes are now on the Nov. 30 WTO ministerial, a date far beyond when a waiver should have been enacted. And Big Pharma and other interests are pushing to transform a meaningful waiver into a meaningless WTO political declaration.

Public Citizen will keep up the pressure to force the Biden administration to show leadership and secure a comprehensive waiver as fast as possible to end the pandemic.