The Obama adminsitration is deliberating whether to get involved in a WTO attack on Canada's green jobs program, according to today's Inside U.S. Trade.

Last September, Japan announced that it would be challenging the Canadian province of Ontario's renewable energy program. As IUT reports:

However, producers can only qualify for the program if they use specific amount of Ontario goods 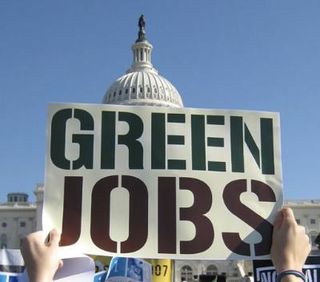 and services in establishing that renewable capacity. The domestic content requirement for projects that entered commercial operation in 2010 was 50 percent, and that increased to 60 percent in 2011, sources said.

The U.S. solar industry source contrasted this with "buy local" elements in the U.S. state and local green energy initiatives, which include a FIT program in Washington state and other renewable energy incentive programs in Massachusetts and Michigan.

Unlike the Ontario measure, these programs do not condition participation in the program on the use of domestic content. Instead, these U.S. programs allow both domestic and foreign producers to participate, but offer a small bonus for firms that use domestic content, the source said.

The source argued that this added bonus is not significant enough to affect the competitiveness of firms that do not source locally. The Ontario program, by contrast, completely excludes companies that do not produce a significant part of their product in the province, this source said.

While highlighting the differences between the U.S. and Canadian programs, this source made it clear that the U.S. solar industry opposes any type of local content requirement, and supports an initiative proposed among Asia-Pacific Economic Cooperation countries to phase out such requirements in the green energy sector.

This source acknowledged that U.S. state and local programs that provide a bonus for firms that source locally may also violate WTO rules, but suggested that these programs are not commercially significant.

In other words, Buy Local programs are fine, so long as they're not effective. Once green jobs policies start actually accomplish their goal of incentivizing local production (i.e. meaning something), that's when we launch a WTO attack.

As the sources cited by IUT note, multinational corporations aren't so much worried about the economic impact of a single green jobs program in a single Canadian province.

Instead, they appear to be worried that the program will set an example that will inspire other nations, states and localities to take comparable action. In other words, Ontario's FIT could have a positive demonstration effect by showing people that you can work together to democratically determine alternatives to the decimation of manufacturing jobs and our climate.

Under WTO rules, third countries can join a WTO attack initiated by another country. The good news (or what passes for good political news in the current climate) is that Obama's trade officials worry that, if they join the attack, it could boomerang and affect U.S. green jobs programs.

The bad news is that they are even having this discussion. Why take the side of solar panel companies that are apparently worried that they don't support enough local jobs to qualify? At a time when long distance shipping is contributing massively to global warming, it seems irresponsible not to look for ways to incentivize firms to produce, and purchase, locally.